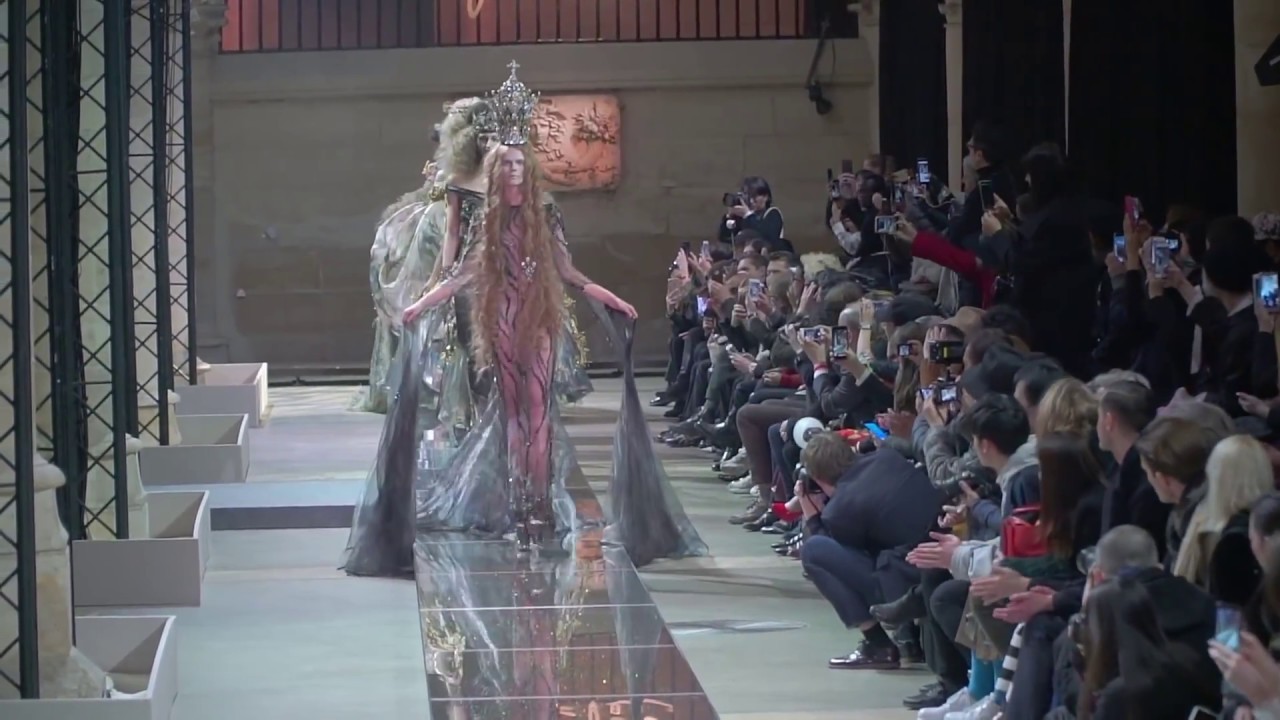 During the beautiful Guo Pei Haute Couture Spring/Summer 2017 fashion show, held on January 25, 2017, as part of the Paris Haute Couture fashion week, the opening model (Irina Kravchenko) had to balance a heavy crown and to walk on wooden platform shoes. During the finale walk she caused a traffic jam when her right tail-sleeve got caught on the side of the runway, and she just stood there like a deer in headlights because she couldn't bend down as impractical her outfit was. Here's what Irina Kravchenko said about this show and the incident: "Actually, at the fitting I tried on three dresses, but at the end they chose the most difficult one for the show. They still needed to shorten it, because heavy ornaments hindered walking, fabric got stuck under the feet that was plainly dangerous considering the shoe platform height. However, the major problem was not the dress. When they gave me the crown, I thought, it must be held as an accessory. We didn’t try it on. There was nothing to fix it on, it is not of the size of a head, but much smaller. It seemed to me that the crown weighs two kilos at least. When I came to the show itself, I was very late. They were making the makeup and hair at the same time. Let me talk about the hair first: they made me braids, then attached a special cap, secured by pins, and put on a wig that became a base of the crown: just several tiny wires. The crown itself was attached with elastic rubber bands, very tightly fixed, but all kept on my own hair. I was thinking: if I tip, shall I just fall or try to catch the crown to save my hair. The rehearsal was already difficult, but not so bad as at the show. The crown gave other feelings. I could turn my head, but I were not able to bend over, it pulled my hair so hard. The makeup was finished only when I was all “done”. The shoes were so high that I needed to half-squat while they were adding final touches (“tears” made from a transparent lip gloss). When I started the catwalk, I was getting more and more nervous, because I was not being able to look down and with this height of shoes it is very hard to balance. A feeling like in the old times, in Noble Maidens schools, when they made you carrying a stack of books on the head without dropping. The podium was in the shape of «U» and, at some point, I realized I could not stand the stress, so I just stopped and closed my eyes for a moment, and then started off again. I do not know whether this moment can be seen on a video. After the turn, I paused once again. And on the final walk, the end of my tail-sleeve got caught under the podium, quite funny because I was the first in the line. At first I thought that the girl behind me stepped over it. So, I turned around and asked her for help, she was not able to bend over at all, so special her dress was. Just like that. Then I addressed a person in the front row and asked him to help. He starred at me without moving. Finally, someone came running, unhooked me, and, smiling, I turned around and carried on." Original interview on: http://www.hautecouturenews.com/2017/interviews/irina-kravchenko/

Step 1: Copy the video link(https://www.youtube.com/watch?v=862vFx5rokE) from your browser.