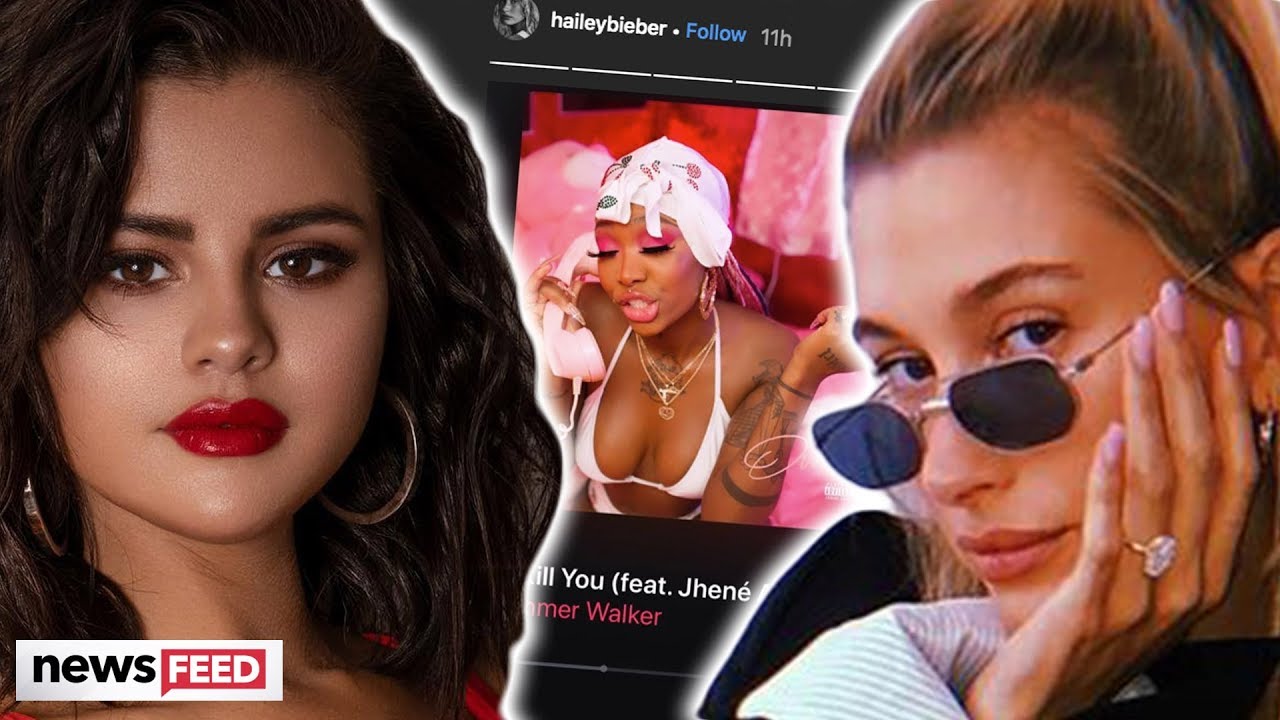 More Celebrity News ►► http://bit.ly/SubClevverNews Hailey Baldwin spoke out after fans accused her of slamming Selena Gomez moments after Sel dropped her newest single. And people still aren’t here for Hailey’s response. What’s up? It’s Sussan Mourad here with Clevver News and Hailey Bieber would very much like to be excluded from this narrative, though it’s definitely one she kinda asked to be a part of. Allow me to explain… On Wednesday, Selena Gomez finally made her return to music after a 4-year long hiatus since her last album and some time off from the spotlight. Her single is called "Lose You to Love Me," and after listening to it a few hundred times already, I am pretty confident it’s at least somewhat about Justin Bieber. Let’s quickly break down a couple of these clues before getting to the Hailey of it all. As we all know, Justin and Selena have been officially broken up for more than a year now, but just like Selena’s new song says, it takes time to heal. ‘Lose You to Love Me’ starts off saying “Set fires to my forest/ and you let it burn/ sang off-key in my chorus/ cause it wasn’t yours.” So it’s pretty clear that Selena is talking about another singer. She continues and says “Set fire to my purpose and I let it burn”. And if you recall, Justin does have an album called Purpose. But the line that really set so many of us over the edge was when she sings “In two months you replaced us, like it was easy”. Justin and Selena officially split, for the last time, in March of 2018, after they were seen biking all over town together. Well, in June of 2018, that’s when we found out that Justin and his future wife, Hailey Bieber, were back together. And they very well could have started back up before the general public knew about it. So this works out to just about 2 or 3 months… like mentioned in Selena’s song. Ok so that’s the recap on why I think this song has at least SOMETHING to do with Justin, or at the very least a whole bunch of Selena’s exes. Now moving on to Hailey. And this is where things get interesting. Hailey has been receiving backlash from people online for posting an Instagram story minutes after Selena dropped her song. Was it just innocent coincidence with very unfortunate timing? Or was it a not-so-subtle message towards Selena? Obviously, we hoped that Hailey didn’t actually literally want to hurt Selena... And now, Hailey is speaking out about said Instagram story and the meaning behind it. Apparently, Hailey wasn't aiming for Selena after all. After JustJared posted about the whole ordeal to Instagram, Hailey responded in a now-deleted comment that said, "Please stop with this nonsense ... there is no 'response'. This is complete BS." Looks like she never wanted to hurt Selena after all… well thats what she’s saying. So crisis averted? Of course not. That’s not how the internet works, we all know that. People still aren’t exactly taking Hailey’s side. Twitter is going off even after Hailey clapped back and called this whole thing BS. One person tweeted and said quote, “SMH to @haileybieber 🙄 You use God as your “scapegoat” all while spewing hate in a passive aggressive way. You got his last name, let @selenagomez have her moment? K, thank you -from everyone and their cousin” Another said quote, “@haileybieber let it rest. Selena is the definition of growth and healing... She is the definition of a strong woman..🔥🔥❤❤ @selenagomez #LoseYouToLoveMe” And another fan wrote quote, “It kinda seems like @haileybieber is trying to stay relevant, while @selenagomez is just having a career and making music. IMO H is simply uber jealous of the triple threat S is and the truth she speaks.” But some other fans are somewhat defending Hailey and they think Selena should just move on. Yes, Sel, thank you, we are so excited that you are back and ready to share this new era of music with us. If Lose You To Love Me is any indication we know it’s going to be iconic. But I want to know what you guys think about all of this. Are you obsessed with Lose You To Love Me? And what do you think of Hailey’s response to all of this? Do you think her IG story was just an unfortunate coincidence? Let me know down in the comments below. After that, be sure to hit that subscribe button and click that bell so you don’t miss any of our new stories. Then click right over here for more entertainment news. Thanks for hanging out with me here on Clevver News, I’m Sussan Mourad and have a great day. For More Clevver Visit: Find us on Facebook: http://facebook.com/clevver Keep up with us on Instagram: http://instagr.am/Clevver Follow us on Twitter: http://twitter.com/ClevverTV Tweet Me: http://www.twitter.com/sussan_mourad

Step 1: Copy the video link(https://www.youtube.com/watch?v=9nYRt5trw3g) from your browser.