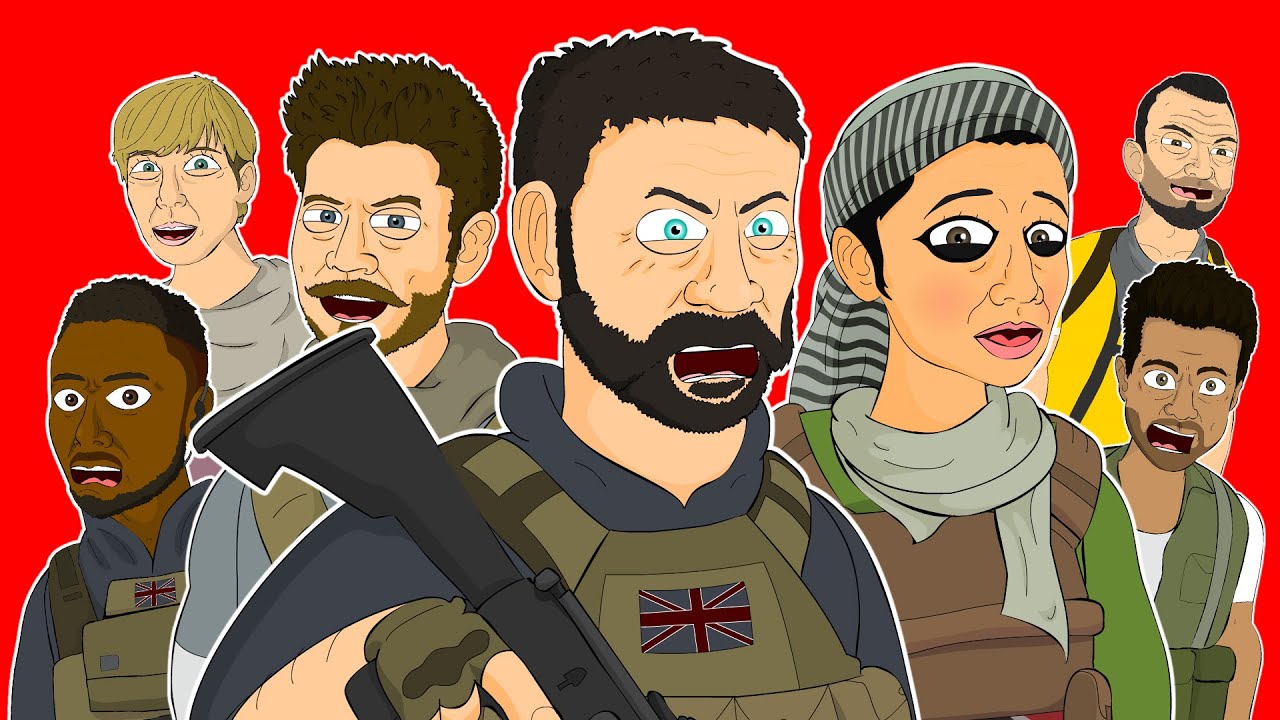 Animated music video parody about the Call of Duty: Modern Warfare campaign ►MORE VIDEO GAME PARODIES→ https://www.youtube.com/playlist?list=PLDE195183F4003D22 ►SUBSCRIBE TO MY CHANNEL→ http://www.youtube.com/user/lhugueny?sub_confirmation=1 ►BEHIND THE SCENES→ https://www.youtube.com/watch?v=KtBhFLowy04 ►TWITTER→ https://twitter.com/#!/MovieMusicals ►FACEBOOK→ http://www.facebook.com/MovieMusicals ►INSTAGRAM→ http://instagram.com/lhugueny Video Game Musicals #79: MODERN WARFARE 2019 THE MUSICAL Captain John Price is thrown into furious rap battle action when the world comes under attack by the evil organization Al Qatala, led by the Wolf and his right hand man the Butcher. However, not all is as it seems as the musical story unfolds and Price is joined by SAS soldier Kyle Garrick, CIA operative Alex and his chief Kate Laswell, Colonel Norris. Together, with the help of Urzikstan locals Farah "Commander Karim" and her brother Hadir, they unravel a major plot twist involving a mischievous Russian General Roman Barkov. ►Script, Song, Vocals and Animation by Logan Hugueny-Clark -------LYRICS------- Verse 1 Price: Got a call on the phone from the CIA, Asking for help to deescalate. T-s in London refused to cease, Bombin’ and shootin’ so we put ‘em to sleep. Raid a townhouse, where j-s greet us, We find the location of Wolf, their leader. American marines catch the b****** alive, Lock him in the embassy, locals storm it like a bee hive. Led by the Butcher, Wolf’s right hand man, The mob overruns us, take Wolf like they planned. They head for the hills, but Farah helps out, To get him back, til the Russians come about. Alex, Farah and Hadir fight the ruskies, They get overrun, seems they’re f***sied.... Hadir reveals gas, that he uses to attack, In a major plot twist that makes it hard to breath. Chorus: T-ism spreadin round the world, Fillin’ evil in the hearts of boys and girls. Can’t blame them all, don’t know right from wrong, Victims of circumstances, wills are strong. We’re all just pawns in a proxy war, No choice who we fight or we support. At the end of the day must stop superpowers, From losing their s***, launching nuclear showers. Verse 2: Flash into the past about 20 years back, Hadir and Farah were orphaned in a Russian attack. Chemical gas wiped out most of their town, Giving context to the actions to which they’re bound. Then flash another ten years closer to now, Farah was w-boarded, but never let down. Just when she thought her militia was screwed, A younger version of myself came and rescued her crew. That’s why she trusts me even when things go to s***, When the US put her whole team on the T list. Gaz and I go dark, catch the Butcher, zero f***s, With the help of Nikolai who hits him with a truck. Get intel on the the Wolf and Hadir, The former gets k’d, take the latter prisoner. Hand him to Laswell, gives Russia the soldier, But keep the intel on the gas factory in Georgia. World war three’s on a fuse, we must stop the spark, Bravo six, going dark. Chorus (c) LHUGUENY 2019

Step 1: Copy the video link(https://www.youtube.com/watch?v=AAootwVMso4) from your browser.