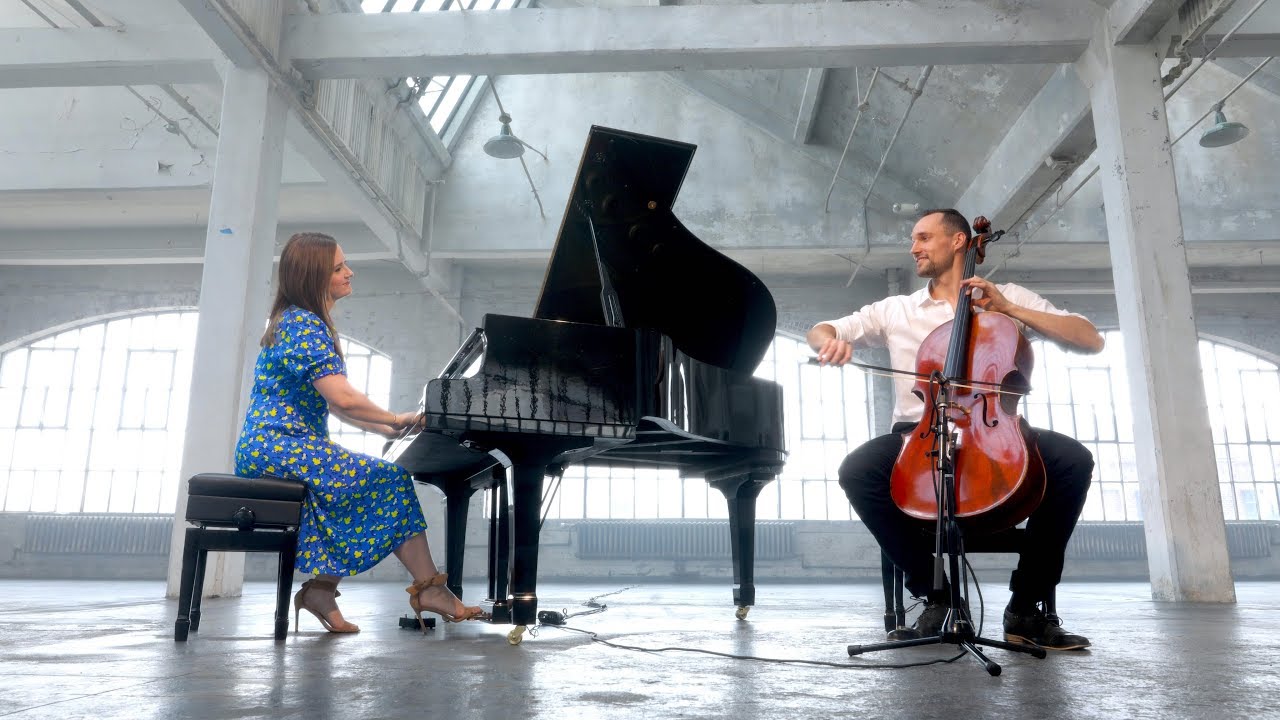 🔔Subscribe and hit the bell to be notified of all videos! 🔔 SHEET MUSIC: http://bit.ly/BrooklynDuo SPOTIFY: http://spoti.fi/29trf2v iTUNES: http://apple.co/1NhATCd INSTAGRAM: http://instagram.com/brooklynduo FACEBOOK: http://www.facebook.com/BrooklynDuo TWITTER: https://twitter.com/brooklynduo Canon in D by Johann Pachelbel, arranged and performed by Brooklyn Duo. Get the sheet music here: http://bit.ly/BrooklynDuo. ❤️Please like and subscribe ❤️ SPECIAL THANKS to Earthworks Microphones for helping us make this shoot happen (and for making the best microphones!). Also, big thanks to Paul Jacobson from Avatar Productions and Pierre Rueda for their video expertise. Hi guys! Sorry for the long wait since our last video. We've been busy recording tons of new stuff and we're excited to share it all with you very soon! Some of you know that we occasionally play for weddings. As you can imagine, we get a LOT of requests for Canon in D, and we've discovered that there are NO good arrangements available anywhere for piano and cello! Hard to believe given its popularity. So we decided to make our own! We tried to stick as closely to the original as possible (which was written for three violins and basso continuo), and we performed it NOT at a snail's pace so the bride can actually make it down the aisle without putting everyone to sleep. 🙊(Yeah, we said it! Nobody likes a slow processional!) Also, the number one complaint about this piece from cellists is always how booooring it is to play because they literally have to play the same 8 bass notes over and over for the entire piece. Problem solved with this arrangement because the cello NEVER has to play the bass! 🙌(The piano does, but we get lots of other fun stuff too so it's ok!) So for all you musicians out there playing weddings, we hope you enjoy playing this arrangement a little more than the ones you were used to...You can get it from www.musicnotes.com. 😊Be sure to let us know in the comments if you do! Brooklyn Duo: Marnie Laird, piano Patrick Laird, cello SUBSCRIBE to our other channel, BROOKLYN CLASSICAL! http://bit.ly/1MVKVEl Brooklyn Duo uses Earthworks microphones. Patrick performs exclusively on Pirastro strings (http://www.pirastro.com). http://www.brooklynduo.com BROOKLYN DUO BIO: Founded in 2014, Brooklyn Duo has quickly established itself as one of today’s most successful classical crossover ensembles. Through its creative arrangements and live video performances, the piano and cello duo has garnered a huge following, with over 800,000 YouTube subscribers, and over 150 million streams annually on platforms such as Spotify and Pandora Radio. In 2014, on a whim, the couple arranged and recorded two pop covers and released them on YouTube. Amazingly, Shakira noticed the duo’s cover and promoted it to her 130 million-plus fan base, saying: “We're loving Brooklyn Duo's piano/cello cover of Empire! Great work guys." The boost that resulted from that exposure and the positive response they were getting on YouTube encouraged the couple to continue creating videos. (Other notable shout-outs since then include ones from Taylor Swift, a-ha and Pearl Jam.) Today, Marnie and Patrick have released over 100 videos on their Brooklyn Duo YouTube channel and 9 albums of covers, spanning artists from The Beatles to Metallica to Ariana Grande. In 2016, the couple started a second YouTube channel, Brooklyn Classical, with the goal of introducing classical music to a larger audience through high quality, live performances. Brooklyn Classical often hosts high-profile guest artists, including the world-renowned Dover and Escher string quartets, percussionist Ivan Trevino and cellist Cicely Parnas. In 2017, Marnie and Patrick partnered with Carnegie Hall and Ensemble Connect to produce a cover of a-ha’s “Take On Me”. The video went viral and garnered millions of views in just a few months. Popular classical music stations Classic FM and WQXR regularly share Brooklyn Duo’s music on their social media pages, with Classic FM calling the duo “masters of the artfully planned pop cover.” Their music has also been featured on several television shows, including Grey's Anatomy and Pretty Little Liars. #brooklynduo

Step 1: Copy the video link(https://www.youtube.com/watch?v=Ptk_1Dc2iPY) from your browser.