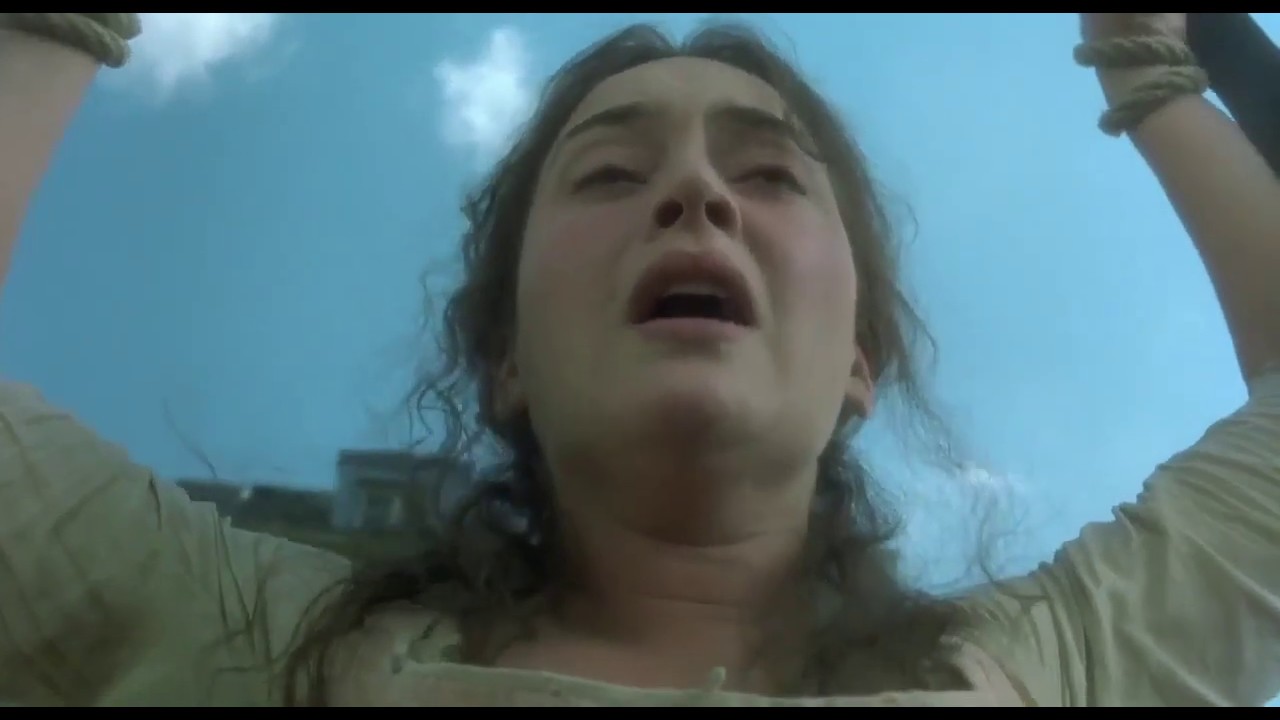 Quills begins in Paris during the Reign of Terror, with the incarcerated Marquis de Sade penning a story about the libidinous Mademoiselle Renard, a ravishing young aristocrat who meets the imprisoned preeminent sadist. Several years later, the Marquis is confined to the asylum for the insane at Charenton, overseen by the enlightened Abbé du Coulmier. The Marquis has been publishing his work through laundress Madeleine "Maddy" LeClerc, who smuggles manuscripts through an anonymous horseman to a publisher. The Marquis' latest work, Justine, is published on the black market to great success. Emperor Napoléon I Bonaparte orders all copies of the book to be torched and the author shot, but his advisor, Delbené, tempers this contentious idea with one of his own: send alienist Dr. Royer-Collard to assess Charenton and silence the Marquis. Meanwhile, the Abbé teaches Madeleine to read and write, while she resists his growing attraction to her. Madeleine reads the Marquis de Sade's stories to her fellow workers. Whilst Madeleine is fascinated with the Marquis de Sade she remains reluctant to give in to his advances. The Abbé and Marquis converse on the Marquis' inappropriate advances on young women. Dr. Royer-Collard arrives, informing the Abbé that the Marquis' "therapeutic writings" have been distributed for public consumption. He presents the Abbé with the ultimatum of silencing the Marquis or Charenton will be shut down by order of the Emperor. The Abbé rejects Royer-Collard's offers of several aggressive archaic "treatments" and asks to speak with the Marquis himself, who promptly swears obedience (winking at Madeleine through a peephole). Royer-Collard takes his leave for the time being and travels to the Panthemont Convent in Paris to retrieve his promised bride, the underage orphan Simone. They are given a run-down chateau by the Emperor, with a handsome young architect, Prouix, on hand for its renovation. The hasty marriage incites much gossip at the asylum, prompting the Marquis to write a farce to be performed at a public exhibition, which Dr Royer-Collard and his young wife attend. The audacious play, a shockingly straightforward parallel of the good doctor's own misogynist domination of his virginal bride, is titled "The Crimes of Love". The performance is interrupted when the inmate Bouchon molests Madeleine off-stage, prompting her to hit him in the face with an iron. The Abbé is seen publicly comforting Madeleine. Royer-Collard shuts down the public theater and demands that the Abbé do more to control the Marquis, or he will inform the ministry that the inmates are running the asylum. Infuriated, the Abbé confiscates the Marquis' quills and ink. The Marquis's wife visits him and he takes out his frustration at not being able to write on her; she retaliates by asking a surprised Dr Royer-Collard that the Marquis be entombed forever. They discuss that the ill-gotten gains from the Marquis's books could be used to effect his salvation, in other words, provide forms of restraint. The lack of writing implements results in more subversive behaviour from the Marquis, including a story written in wine on bedsheets and in blood on clothing. This results in further deprivation, eventually leaving the Marquis naked in an empty cell. Charlotte, one of the maids, reveals that Madeleine has been helping the Marquis. Madeleine is whipped on the order of Dr. Royer-Collard until the Abbé stops him by offering himself instead. The Abbé decides that Madeleine must be sent away. That night she visits his chamber to beg him to reconsider sending her away and confesses her love for him in the process, prompting him to kiss her passionately. They abruptly break away at the realization of what they are doing. Madeleine runs off and Charlotte catches the Abbé calling after her.

Step 1: Copy the video link(https://www.youtube.com/watch?v=Zlbiqsa7dTQ) from your browser.