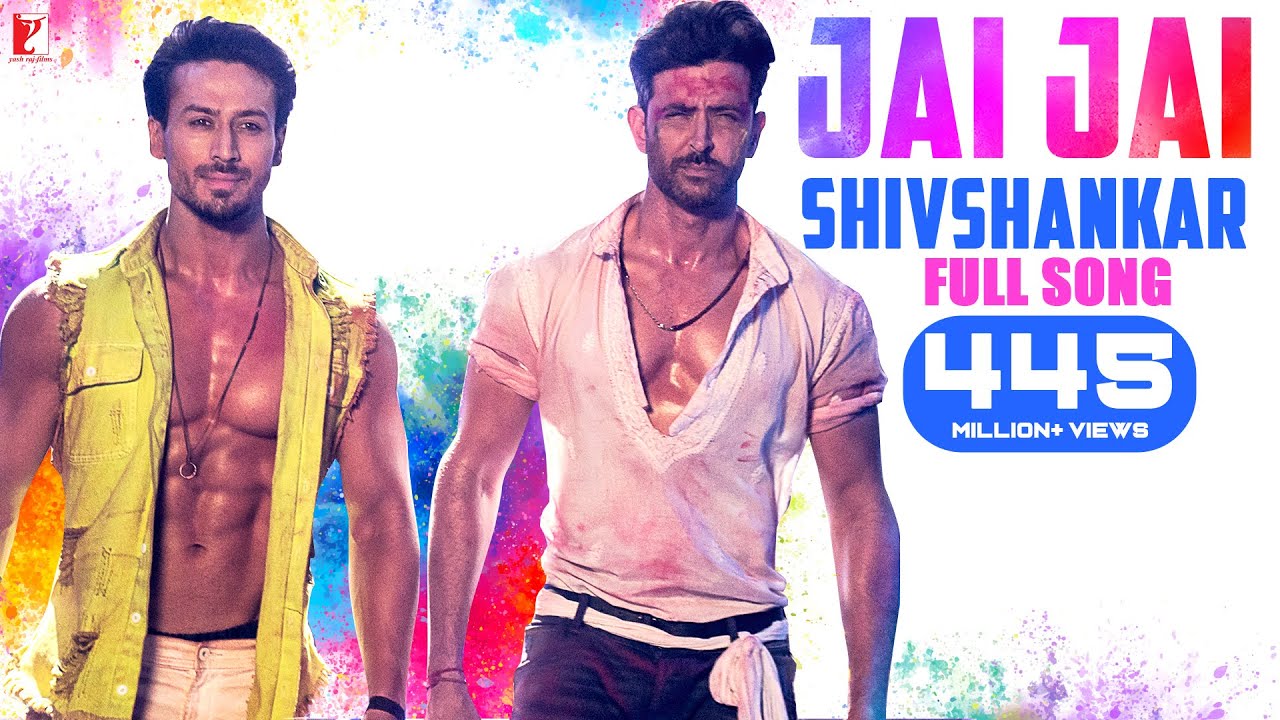 #YRFnewreleases: Kadi Kadi Song - https://youtu.be/4ZA7ikhjSXY ► Book your Tickets here 👇 Book My Show: http://bit.ly/WarMovieTicketBookMyShow Paytm: http://bit.ly/WarMovieTicketPaytm Hrithik Roshan and Tiger Shroff create magic, one move at a time in the celebratory song #JaiJaiShivshankar - full song OUT NOW. ► Subscribe Now: https://goo.gl/xs3mrY 🔔 Stay updated! 🎧 Song Credits: Song: Jai Jai Shivshankar Singers: Vishal Dadlani, Benny Dayal Music: Vishal and Shekhar Lyrics: Kumaar Recording Studio: YRF Studios [Shantanu Hudilkar, Vijay Dayal, Chinmay Mestry, Abhishek Khandelwal, Manasi Tare] Mixed By: Vijay Dayal [YRF Studios] Mastered By: Donal Whelan [Mastering World, Wales - UK] Produced by: Abhijit Nalani Additional Music Credits: Doitara Played by: Vishal Dadlani Live Rhythms and Percussions Arranged & Conducted by: Dipesh Varma Percussions Performed by: Dipesh Varma, Keyur Barve, Omkar Salunkhe, Shikhar Naad Qureshi, Satyajit Jamsandekar Chorus: Umesh Joshi, Vijay Dhuri, Swapnil Godbole, Janardan Dhatrak, Varun Likhate, Yash Kulkarni, Pragati Joshi, Aditi Prabhudesai Choreography: Bosco - Caesar Stay in the filmy loop: ► Like us on Facebook: https://facebook.com/yrf ► Follow us on Twitter: https://twitter.com/yrf ► Follow us on Instagram: http://instagram.com/yrf ► Visit us on: https://www.yashrajfilms.com © Yash Raj Films Pvt. Ltd. 🎬 Movie Credits: Starring: Hrithik Roshan, Tiger Shroff, Vaani Kapoor Director: Siddharth Anand Producer: Aditya Chopra Music: Vishal and Shekhar Lyrics: Kumaar Director of Photography: Benjamin Jasper Release Date: 2 October 2019 Synopsis: India’s top agent Kabir (Hrithik Roshan) leads the Elite Shadow Unit of R&AW, a compact group of the crème de la crème of the armed forces who are personally trained by him and work with him on various high-risk missions across the world. Among Kabir and Colonel Luthra’s key targets are an international arms baron Rizwan Ilyasi who has been key in various acts of terrorism against the country. Khalid (Tiger Shroff) has fought his way up the ranks of the Indian armed forces. His greatest challenge and battle has been to fight against the sins of his father, once a decorated soldier working with Kabir who had turned a traitor. His ambition has been to join Kabir’s team to remove any stains on their family name. Kabir is not keen due to their past history, but Colonel Luthra requests him to, and gradually Kabir is also impressed by Khalid’s intense dedication and grit. Khalid becomes Kabir’s greatest soldier ever, flirting with death repeatedly in mission after mission as they go after the country’s enemies, including a mission against Rizwan Ilyasi that nearly kills Khalid. But Khalid’s greatest mission, his toughest yet, is still to come. When his own mentor Kabir turns rogue and starts to go after top officials and scientists and officers in the Indian establishment, targeting and executing them viciously across the world. Colonel Luthra is unsure if Khalid has it in him to go after Kabir. Is he clever enough to hunt the man who trained him, and even if he does get him, does he have it in him to put a bullet in his hero’s head? Luthra advises Khalid against the mission but he insists – he is the best protégé and the only one who can track the mentor. And only Kabir can answer the crucial question – why did he turn rogue? A vicious cat and mouse game ensues as protégé goes after mentor in a war that spills across the globe. As the chase unravels both Kabir and Khalid begin to finally realize, what desperate stakes really drive them in this terrifying war. #YRFnewreleases #yrf #WAR #VaaniKapoor ​​​#SiddharthAnand #VishalDadlani ​#ShekharRavjiani #BennyDayal #Kumaar ​#HrithikVsTiger #TeamHrithik

Step 1: Copy the video link(https://www.youtube.com/watch?v=oGneAab3e88) from your browser.

How To Use Natural Light for Boudoir Portrait Photography!! 3 Tips!
Next: