Prayer For The Holy Souls In Purgatory

Prayer For The Holy Souls In Purgatory 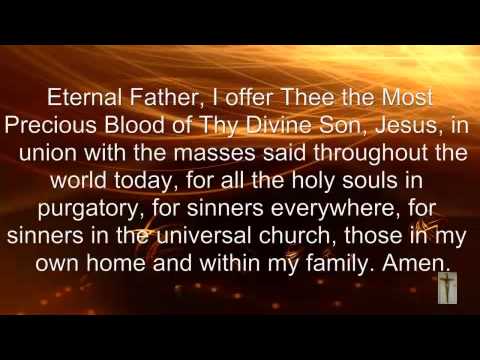 In spanish https://www.youtube.com/watch?v=MOeIlzr-OWQ This is a very powerful and short prayer. All of us have relatives that have passed away and are unsure if they went to heaven, purgatory or hades. With this prayer we can help our deceased relatives shorten their time in purgatory and help free them! Purgatory is scriptured! If anyone does not believe in purgatory I challenge you to meditate on this topic. If you were baptized and are a spiritual person I'm sure you will be convicted by the Holy Spirit and guided in the right direction. I strongly believe in purgatory and I encourage everyone to read the info contained on the websites below and educate yourselves. Once I realized the importance of praying for the holy souls in prison (purgatory) I decided to make this short video so people can download this video and install it in there mp3 players and pray this daily as many times as possible. St. Gertrude http://www.olrl.org/pray/stgertrude.shtml http://www.ourcatholicprayers.com/prayers-for-souls-in-purgatory.html http://www.holysouls.com/prayers.htm http://www.catholictradition.org/Gertrude/saint-gertrude7.htm (2 Maccabees 12:38-45 NRSV Prayers for Those Killed in Battle 38 Then Judas assembled his army and went to the city of Adullam. As the seventh day was coming on, they purified themselves according to the custom, and kept the sabbath there. 39 On the next day, as had now become necessary, Judas and his men went to take up the bodies of the fallen and to bring them back to lie with their kindred in the sepulchres of their ancestors. 40 Then under the tunic of each one of the dead they found sacred tokens of the idols of Jamnia, which the law forbids the Jews to wear. And it became clear to all that this was the reason these men had fallen. 41 So they all blessed the ways of the Lord, the righteous judge, who reveals the things that are hidden; 42 and they turned to supplication, praying that the sin that had been committed might be wholly blotted out. The noble Judas exhorted the people to keep themselves free from sin, for they had seen with their own eyes what had happened as the result of the sin of those who had fallen. 43 He also took up a collection, man by man, to the amount of two thousand drachmas of silver, and sent it to Jerusalem to provide for a sin offering. In doing this he acted very well and honorably, taking account of the resurrection. 44 For if he were not expecting that those who had fallen would rise again, it would have been superfluous and foolish to pray for the dead. 45 But if he was looking to the splendid reward that is laid up for those who fall asleep in godliness, it was a holy and pious thought. Therefore he made atonement for the dead, so that they might be delivered from their sin.) Notice the noble Judas blessed the ways of the Lord and turned to supplication, praying to blott out the fallen soldiers of their sin. He took up a collection and provided for a sin offering. God says that in doing this he acted very well and honorably! If God says He acted very well and honorably in doing this why should we question it? For if Judas was not expecting them to rise again it would have been superfluous and foolish to pray for the dead but It was a holy and pious thought and he made atonement for the dead! God says that it was a pious thought and he (Judas) Made atonement for the dead! He didn't say he attempted to make atonement. Jesus Christ encourages us to pray for the holy souls that are suffering in prison in the new testament as well! People read this verse and think it refers to the prisons on earth but it clearly refers to the spiritual suffering in (prison) purgatory. (Hebrews 13: 3 Remember those who are in prison, as though you were in prison with them; those who are being tortured, as though you yourselves were being tortured.) The word of God says those who are being tortured. The People in the prisons on earth are not being tortured! They eat 2 or 3 meals a day, watch tv. Lift weights and go out of the cells to the yard. (1 Peter 3: 18 For Christ also suffered for sins once for all, the righteous for the unrighteous, in order to bring you to God. He was put to death in the flesh, but made alive in the spirit, 19 in which also he went and made a proclamation to the spirits in prison, 20 who in former times did not obey, when God waited patiently in the days of Noah, during the building of the ark, in which a few, that is, eight persons, were saved through water.) Jesus Christ went himself to make a proclamation to the holy souls in prison during the 3 days following His crucifixion on the cross. Christ visited the holy souls in prison (Purgatory) that had being there since the days of the building of the Arc way back in the book of Genesis 6:13-14! How many thousands of years was that to the date of Jesus crucifixion? He would not have gone to proclaim to the souls that had been in prison (purgatory) if it would have been in vain.

Step 1: Copy the video link(https://www.youtube.com/watch?v=wvApxavsh-g) from your browser.

A Litany for the Holy Souls in Purgatory